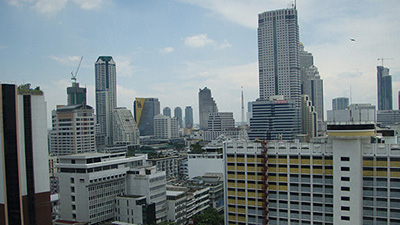 Silom in Thai means ‘windmill’. This gives you a clue to the humble origins of an area in Bangkok that is now the financial heart of Thailand.

In the Nineteenth Century Bangkok was growing rich from trading with European merchants. As a result the Chaophraya River and the klongs or canals were the main places of urban development in the city. Silom was not part of the canal and trading scene, and as a result was a rural backwater yet to be disturbed by a growing metropolis. Rather it was a place where fruit and rice were grown and wind power harnessed to water the orchards.

Things started to change in the windmill area when a canal was excavated. This later became the Silom Road.

Silom is a sub-district of the wider Bang Rak area. It is also the name of a road. In the early Twentieth Century Thailand benefited from the reforms embraced by Rama V. Infrastructure improved, laws were reformed, colonialist ambitions curbed and feudalism dismantled. Since then Thailand’s economy has gone from strength to strength. From early on Silom became the financial centre of the capital. 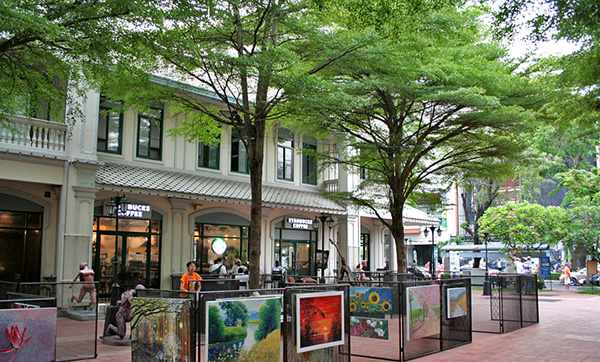 Now banks, large corporations, insurance houses and financial institutions have their flagship headquarters.in Silom. Companies based in Silom include Charoen Phokphand Group and Bangkok Bank. This has made Silom the Wall Street of Bangkok.

Against this modern landscape with showcase skyscrapers and large public spaces is another side to Silom. It is also home to the infamous Patpong area of Bangkok. Patong is only rivalled in unadulterated sleaze by Soi Cowboy in Sukhumvit and the Nana Plaza. Here you will find bars where men not only buy women’s services but also see shows not suitable for the prudish. This area has changed a lot since the land was the family seat of Luang Patpong Panich, a rich Chinese immigrant honoured by the Thai king. The title ‘Luang’ is equivalent to a British lord.

Sri Mariaman Temple in Silom is a Dravidian style Hindu temple in Silom. It was founded in 1827 by a Tamil immigrant. Now it is a towering and impressive building and the main Hindu place of worship in the city. As a result there is an Indian community living in Silom around the intersection with Charoen Krung Road.

Buildings in Silom with Links to the Past

One of the buildings with a history is Silom Village. Today it is a restaurant and shop, but originally it was part of a grouping of teak buildings built by Cheaw Chong Pre in a 5 rai compound. In 1978 the buildings were joined and became ‘Silom Village Trading Centre’.

Sala Daeng is now the name of the sky train (BTS) and underground station (MRT) in Silom but before it was royal land. The name means ‘red roof’ and refers to the red roof of the train station built by the Danish Railway Company. The nobleman’s house presiding in Sala Daeng is now the Dusit Thani Hotel.

On Convent Road St. Joseph’s Convent and the next door Carmelite Monastery is now the site of the Swiss Lodge Hotel. It claims to be a ‘European Boutique style hotel’. Sadly none of the original features of the convent or monastery have been retained.

Silom has been transformed by major infrastructure works in Bangkok as well as by the growing financial might of the country. Silom has a unique identity that embraces the modern, the nefarious as well as the religious. This makes Silom one of the most interesting areas of Bangkok, and in a way provides a microcosm of the wider city.