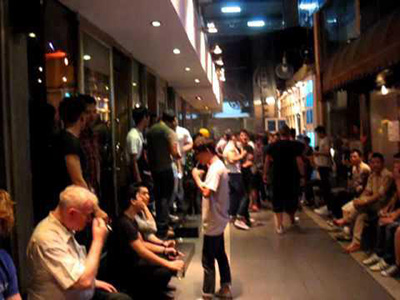 While Thailand is generally regarded as a Buddhist and conservative country that frowns on such exhibitions of personal freedom such as topless sunbathing and men parading around off the beach in tight speedos there is a certain unofficial tolerance for the gay and lesbian community.

The term ‘katoey’ is used to cover a whole range of sexual orientations. Perhaps the most visible and talked about version of ‘katoey’ is the ladyboy. You can spot ladyboys at most of the red light districts in the city. They also mix with the day time population and can be seen working in guest houses, supermarkets, street stalls etc. Their exaggerated and openly gay behaviour is tolerated, and often thoroughly enjoyed by workmates.

One of the best places to head for a night out in Bangkok if you are gay is Silom. Here you will find openly gay bars and clubs with a lively pickup scene. The lesbian scene is smaller and more underground.

Soi 4 is off Silom Road. Here you will find a collection of bars frequented by Thai office workers, expats and men looking for fun. Naturally there are young men selling services as well as the usual collection of older men on the look-out. The bars don’t charge an entrance fee. A glass of beer cost between 60 and 70 Thai Baht.

Popular bars include Telephone Bar and Balcony Bar. Telephone Bar has a telephone on each table so that men can phone other tables for a bit of flirting. Much of the seating is outside, street side so people can check out who is walking up and down the street.

Soi 4 tends to be an early evening venue. As the night progresses people tend to drift over to Soi 2 or Soi Twilight.

Soi 2 is where the nightclubs are located. It’s a short walk from soi 2. Here you will find Bangkok’s most famous gay night club called DJ Station. The entrance fee is 150 Thai Baht with 1 free drink during the week and 300 Thai Baht at the weekend with 2 free drinks. The only dress restriction is no flip flops or thongs (as they are called in Australia). However, as this is a gay club much of the clientele are dressed to impress.

Naturally not all the customers at DJ Station are gay, but many are. If you are gay and abroad you are more than likely to feel at home here.

Finally, it should be mentioned that there is an age restriction for the bars and clubs in soi 2 and 4. The age limit is 20 years old. You will need a passport or valid ID to get into these areas. They are monitored by CCTV.

To find out more information about gay bars and clubs in Silom check out Gay Passport.