There are two establishments close to each other in Silom all flying the Jim Thompson flag. This post will briefly look at what these businesses have to offer as well as give a bit of background about the historical figure called Jim Thompson.

Let’s tackle the man first. Jim Thompson was an educated American who volunteered to join the war effort against the axis powers in the 1940s. Thompson was drafted into the Office of Strategic Services (OSS) that was the forerunner of the CIA. At the end of the war Thompson found himself assigned to Bangkok. In 1946 the powers that be wanted him to retire; however, Thompson had already become enamoured of Bangkok, Thailand and oriental culture and opted to stay as a ‘civilian’. I put the word in parenthesis because Thompson quickly became a famous and influential man in Thailand. He almost single-handedly revived the dying silk industry at the time. At the height of his economic success Jim Thompson vanished in the Cameron Heights in Malaysia. There was a large man hunt and investigation. In 1974 Thompson was declared death in absentia by a Thai court.

The spying background of Thompson along with the mystery of his disappearance has created a romantic aura around the man. This found an outlet in tourism. Thompson was a keen collector of antiquities and local crafts. He created a very impressive home compound next to a Bangkok canal or klong. It is located on Rama 1 road next to the National Stadium, just a short hop from Silom MRT on the Silom Line.

The museum is in a beautiful, peaceful location and has a number of traditional teak houses as well as a series of rare exhibits as well as information about Jim Thompson’s life and his engagement with the silk industry. It has become one of the best loved tourist destinations in the city. I suspect the tie-in with spying only helps the tourist numbers.

There are two branded Jim Thompson outlets close to each other in Silom. See the map below.

These are sometimes confused by tourists as well as internet reviewers with Jim Thompson House which is the main museum. Jim Thompson is a growing brand in Thailand with outlets popping up in Pattaya (2 shops) and Phuket (also 2 shops). 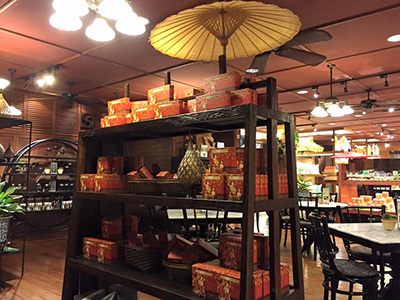 Both the Jim Thompson businesses in Silom are just off the Surawong Road. At 9 Surawong Road is the main outlet for selling silk, fabrics, furniture, house ware and souvenirs made by Jim Thompson Ltd. It is a factory outlet that has opened, closed and re-opened. This is probably because it competes with other Jim Thompson shops in Siam and Sukhumvit as well as the museum that has a much greater footfall.

The shop is well worth a visit. They have a wide range of products. The company are branching out into fashion, interior design and shows the new creative mindset entering the crafts segment of the economy. However, be prepared to pay a lot more than at a street market. 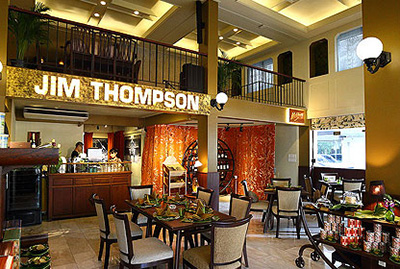 The prices for the restaurant are not cheap. However, they serve larger portions then you will encounter in many Thai restaurants. The kitchen staff go to more effort to present the food nicely. For the more hard-core Thai food fans it might feel that the food is made less spicy and more suitable for ‘farang’ taste.

There are a number of menu items suitable for vegetarians. Those with food allergies will have to vigilant as Thai restaurants in general have little interest in preventing cross contamination; and, the possibility of getting a nut free kitchen is a lot to be hoped for.

Jim Thompson is an obscure Second World War spy who made some astute business dealings in Thailand. He helped revive the dying silk industry in the country and his name is a successful commercial brand.

While the Jim Thompson story has nothing to do with food, the restaurant in Silom is good and should be sought out by Thai food enthusiasts in the area who aren’t on a tight budget.

The shop on Surawong Road is a better representation of the original Jim Thompson legacy but again has moved with the commercial times and bears little relevance to the aesthetics and curating efforts of the mystery man himself.