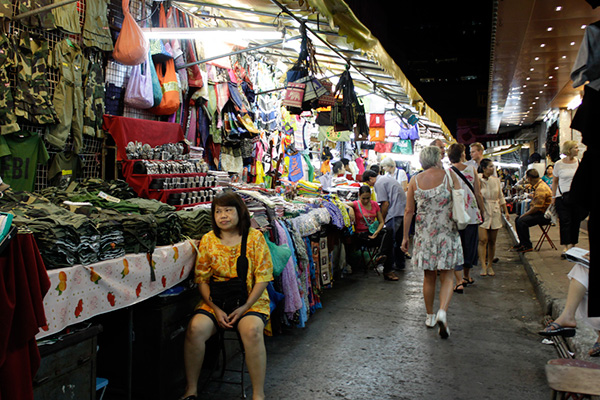 Those not familiar with Silom will probably have heard of the infamous Patpong Night Market. It combines two types of the illicit. The market is full of vendors selling fake brand and designer goods and the bars and clubs in the area offer sex shows and sex for sale.

For many backpackers going to Patpong is a Thai right-of-passage, like attending the Full Moon Party in Koh Phangan. You have to buy a fake Rolex at the market and then watch a show involving coke bottles and ping pong balls.

Patpong consists of two parallel roads. It is next to Silom Road and Surawong Road. These parallel roads are called Patpong 1 and Patpong 2. Most of the bars are on Patpong 1. Less prominent, but more of the same is Patpong 2. The next street along is Soi Jaruwan. This street services the needs of gay men. The nearby Soi Thaniya has expensive hostess bars catering mostly for Japanese men. In terms of sex for sale Patpong has quite a lot to offer.

This area was the original place for ‘R and R’ for American troops involved in the Vietnam War in the 1960s. It gradually overtook New Petchburi Road as the main place to buy female company. The heyday of the area was the 1970s and 1980s. Things changed in the 1990s when the owner of Patpong decided to run a street market in the area. This changed things as shoppers started jostling with men out on nefarious jaunts. As a result other ‘red light’ areas grew in size and popularity such as Soi Cowboy and Nana Plaza.

Today tourists visit Patpong Night Market after dark to witness this vibrant clash. People will browse the stalls and take peeks at the scantily clad ladies hanging around the bars. Many tourists will pluck up the courage after looking at the street stalls to approach one of the bars promising ‘sex shows’.

Previously travel guides warned people of the numerous scams associated with the sex shows such as intimidating bouncers insisting on a large cover charge payment on exit (when the sign outside said ‘free show’). These scams have largely been eradicated. Now the main reason not to take in a show is a moral conscience. It is hard to imagine that the girls on show and on sale are not the victims of poverty and a laissez-faire government attitude that turns a blind eye to the exploitation.

The same attitude goes for the market. There is no hiding the fact that Rolex, Apple, Gucci, Manchester United and a host of other big name companies are having their branded products copied and sold openly. American law might reach into the corridors of power at FIFA but cannot reach Patpong. Even the present Junta’s ‘crusade’ seems uninterested in stopping the blatant copyright infringements on display at Patpong Market.

At the market you can find all the latest football tops with the big names of the sport. There are fake iPods and iPads. There are Gucci bags. Fendi bags. Rolex and Breitling watches. Posh jeans. And lots more.

You have to haggle hard. There are no price tags and vendors hike up the prices by 100% when dealing with ‘farangs’. Best to try walking away and feigning disinterest. From a shoppers point of view the stall owners are under pressure to make sales as they have large kickbacks to pay the police.

The quality of the fake goods varies considerably. Some of the products are meticulous copies displaying the undoubted skill of Thai craftsmen. Some of the watches look exactly like the real thing. Others are shoddy reproductions. You have to inspect your intended purchases carefully.

Nevertheless, you can kit yourself out here to look like you are rich if that is your thing. For many, like Lady Gaga, getting a fake Rolex makes a memorable souvenir of Bangkok. Who can forget the scowl from the authorities when the pop star made the now famous tweet. It stopped the trade in watches for at least a week!