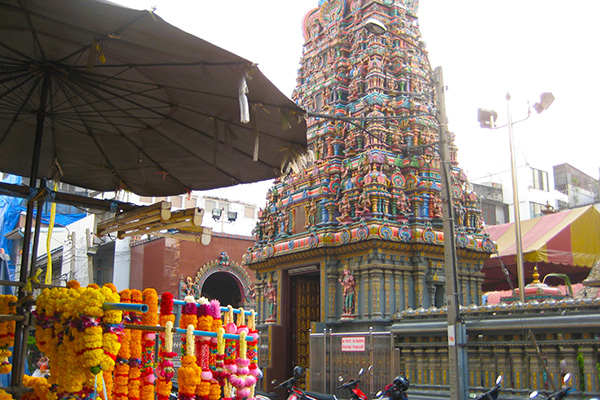 Sri Maha Mariamman (also called Wat Prasri Maha Umathewee) is the main Hindu temple in Bangkok. It is located across the street from Silom Soi 20. It is hard to miss since it is a towering Dravidian style temple. It is free to enter and those who have come to sightsee are just as welcome as those Hindus who wish to attend a puja.

Other temple buildings celebrate other Hindu deities. As with many Hindu temples it is a magnificent building with a high central tower in the southern Indian Dravidian style. The temple is made of stone and all around the building you can see intricate carvings, many of which are also coloured.

The entrance to the temple is marked by a colourful tower (gopuram) depicting various Gods and Goddesses.

The temple is focal point for the Hindu Tamil community in Bangkok. Outside the temple there are stalls selling flowers and garlands used for worship. For those interested in seeing Hindu festivals, Navaratri is celebrated at Sri Maha Mariamman. It is a nine day festival dedicated to the worship of the deity Durga. The festival occurs in October. Check our events calendar for dates of Navaratri.

The temple is free to enter. There is a website that details worship times. Unfortunately the website is riddled with coding areas. It just goes to show that not all Indians are internet geniuses.

In Thai the temple is often referred to as ‘Wat Khaek’. This means ‘Temple of Guest’ and highlights the continued discrimination Indians experience in Thailand.

Sri Maha Mariamman is open from 6am to 8pm. Admission is free. Take your shoes off before entering a temple building.

After note: Those interested in studying Hindu ideas and practising yoga as well as reiki, meditation and tantra might want to look into visiting the Srithanu area in Koh Phangan which has become something of a New Age enclave.