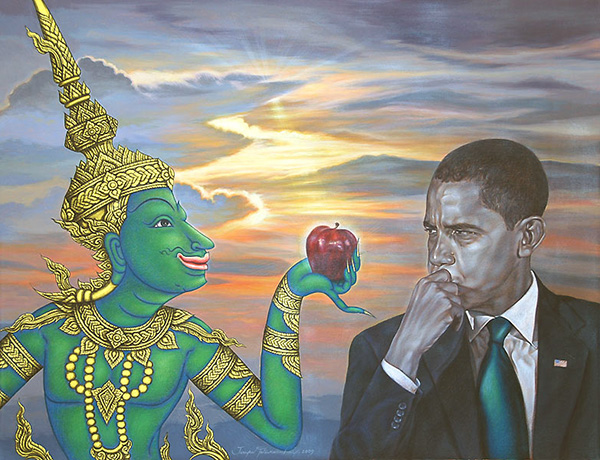 Thavibu Gallery is the perfect place to head if you are tired of seeing paintings of Buddha or elephant carvings. The gallery showcases the emerging modern art scene in Thailand. It features up and coming artists from not only Thailand but also Myanmar and Vietnam. The exhibitions give a real insight into the current state of art in Thailand.

Thai art was heavily influenced by Buddhism and favoured traditional rural motifs. In 1923 the Thai government invited the Italian artist and teacher Corrado Feroci to lecture at Silapakorn University. He became a naturalised Thai and is credited with starting the modern Thai art movement.

Artists you can see at Thavibu Gallery are much in the Feroci mold. Their themes and styles vary but all eschew traditional Thai Buddhist themes. Many address issues of urban identity, society’s obsession with money and hypocrisy.

There is Vasan Sitthiket who has a strong political content to his paintings . He strongly criticises politicians and capitalists for exploiting the masses.

Jirapat Tatsanasomboon is another overtly political artist who uses the narrative of Thailand’s only epic the Ramakien (the Ramayana) to point out abuses of power. His work is very allegorical and makes striking juxtapositions between the contemporary and the traditional.

These are just two of numerous exciting and challenging artists on display at Thavibu Gallery. You can also purchase art at the gallery. There are also regular new exhibitions so this art space entices you to return again and again. For me the art on display show hope for Thailand’s future – the artists clearly see the problems in the body politic and continue to challenge the forces of repression in the country.